In April of 1968, after more than six weeks of travel across increasingly fragile and broken ice, a group of snowmobilers reached the North Pole. Despite claims by Peary and Cook to the contrary, it is believed that this group was the first surface expedition to reach the North Pole, traveling over land and sea. This was the Plaisted expedition, named for their leader, Ralph Plaisted (1927-2008), an insurance salesman and amateur explorer from White Bear Lake. 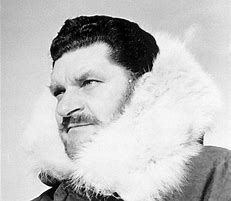 This may be the only polar expedition to start from challenge thrown down in a bar, and that’s one Duluth connection to this tale: the bar was the Pickwick, in Duluth. In 1965, snowmobiles were a new consumer product and Plaisted loved his. He drove nonstop from his cabin in Ely to his home in White Bear Lake and raved about the trip to his friend Dr. Art Aufderheide, a Duluthian. Tired of hearing about it, Aufderheide jokingly suggested that if Plaisted thought snowmobiles were so great, he should take one to the North Pole—thus was the Plaisted Expedition born.

No one on the expedition had previous polar or exploration experience, though Plaisted was an outdoor adventurer. The expedition was made up of the following: Ralph Plaisted, insurance salesman, was the expedition leader. Walt Pederson was the mechanic, and had a Ski-Doo dealership. Jerry Pitzl, a geography teacher, was the navigator. Jean-Luc Bombardier, a member of the Bombardier family, the manufacturers of Ski-Doo, was a snowmobile racer. The family agreed to provide Bombardier Ski-Doos for the expedition on the condition that a family member be part of the team.

Plaisted, Pederson, Pitzl, and Bombardier are the four that made it to the pole, along with two camermen. Also on the expedition team were Art Aufderheide, a doctor; and Don Powellek, an engineer who served as radio operator. There were also several members of the expedition at base camp in supporting roles. 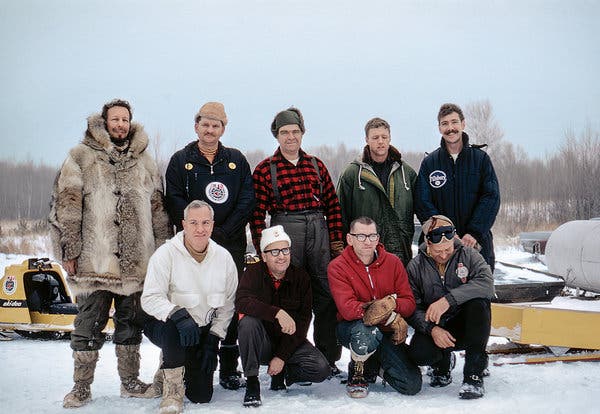 Some of the 1968 expedition team before their departure from Minnesota.

Plaisted was a wonderful promoter. He got many sponsors, and his first trip, in 1967, included a crew from CBS news and television journalist Charles Kuralt. The April weather was unseasonably warm, which caused the ice to break up, and the expedition had to retreat. Even though the expedition was not a success, Kuralt wrote a book about the experience, called “To the Top of the World.”

They regrouped and tried again in 1968, leaving on March 7 from Ward Hunt Island, one of the northernmost points of Canada. It took them 43 days, navigating by sextant, and they traveled 825 miles, though the straight-line distance was only 417 miles. The extra miles were logged detouring around openings in the ice and other obstacles. The temperatures were in the -60’s on the day they left, and didn’t get above 40 below for the first four weeks. Add to that winds of 40 mph and you have some wicked wind chills. Ice ridges towered as high as 40 feet.

On their second trip they had 50 companies backing them, to the tune of $200,000, which would be $1.4 million today. They used four Ski-Doo’s with 16 hp engines, which in that time was powerful for a snow machine. However, all was not privation. Unlike previous polar expeditions, they did not have a spartan ethos. They received airplane supply drops of food and supplies, which included gas for the machines, scotch, beer, and cigarettes.

As the men closed in on the pole, Plaisted made a tough decision. Guy Lawson, writing for the New York Times Magazine, describes the situation as follows:

Until that point, the men had been forced to share snowmobiles, slowing the expedition down considerably. Plaisted decided to trim the team so that each man would have a machine to himself. To speed their progress, Aufderheide volunteered to return to base camp to help with logistics; making it to the pole had never been his ambition. Plaisted then told the cameraman and Powellek, his best friend and the deputy leader, to head back as well. Forced from the ice party, Powellek felt discarded and betrayed; after working for years on the expedition, he was being denied his chance at the prize.

Jerry Pitzl, the navigator, had been at base camp, but now he was flown out to join the ice party and keep them on course. The four each had their own snowmobiles . . .

Victory at hand, Plaisted was presented with a quandary. Two key members of the expedition — Aufderheide and Powellek, his best friend — could be flown up to share the experience of reaching the pole, or the two cameramen working on the documentary could come to provide a record of the deed; there wasn’t room in the plane for all of them. Plaisted chose the filmmakers, bitterly disappointing Powellek, who believed that it had been Plaisted’s plan all along to cut the other two out and steal the spotlight.

They arrived at the pole on April 19, 1968, and their position was verified by a United States Air Force plane that flew overhead, establishing their claim as the first land/sea expedition to reach the pole. It may now be impossible to duplicate this feat, as the ice cap grows smaller due to warmer oceans.

When they returned from the pole, Plaisted anticipated much more acclaim than they actually received. The National Geographic Society wanted the rights to the story, but Plaisted turned them down, expecting better offers that never materialized.

As Lawson explains, “Since Peary’s day, the magazine had been the official arbiter of exploration claims like theirs; with his refusal, Plaisted denied his team the legitimacy only the society could bestow.”

For this reason, the trip has never gotten the coverage it deserved. In fact it was largely forgotten until Guy Lawson wrote his New York Times magazine article in 2016. (“An insurance salesman and a doctor walk into a bar, and end up at the North Pole: the story of an accidentally pioneering expedition.”)

The expedition may also have been overlooked because for a long time they were known as the “first mechanized expedition” to reach the pole, when it was still believed that Cook, in 1908, and Peary, in 1909, were the first to the pole. It is also true that many others reached the pole by air and icebreaker before the Plaisted expedition. But both Cook’s and Peary’s accounts are now disputed, leaving the Plaisted expedition to claim the title of first undisputed arrival via the ice surface.

In 2016, Sony pictures signed Will Ferrell to play the part of Ralph Plaisted in a feature film about expedition. No further information about the film is available at this time.

Lawson, Guy. “An insurance salesman and a doctor walk into a bar, and end up at the North Pole: the story of an accidentally pioneering expedition.” New York Times Magazine, 3/17/2016. https://www.nytimes.com/2016/03/20/magazine/an-insurance-salesman-and-a-doctor-walk-into-a-bar-and-end-up-at-the-north-pole.html?_r=1

Ruggiero, Adam. “Will Ferrell to play man who snowmobiled to the North Pole.” Gear Junkie, 5/6/2016. https://gearjunkie.com/will-ferrell-ralph-plaisted